Posted by Diane Posted by December 13, 2021 In Uncategorized

Vancouver, British Columbia, December 13, 2021 – Emgold Mining Corporation (TSX-V: EMR) (“Emgold” or the “Company”) is pleased to report results of a soil sampling program at its Golden Arrow Property, NV (“Golden Arrow” or the “Property”).  A total of 1,109 soil samples were collected from two areas located in the southern part of the Property.   Based on the results of the sampling, two new exploration targets have been discovered. These targets have been named the Big Hope Prospect and Kawich Prospect.  Current resource areas at Golden Arrow are named Gold Coin and Hidden Hill.

David Watkinson, President and CEO of Emgold stated, “Emgold is excited by the discovery of these two new target areas to the south of the Gold Coin and Hidden Hill.  Golden Arrow currently has a measured and indicated mineral resource of approximately 300,000 gold equivalent ounces and the Company’s goals are twofold: the first is to expand the Gold Coin and Hidden Hill mineral resources and the second is to develop additional mineral resources from new exploration targets.  The discovery of the Big Hope and Kawich prospects is a successful first step in identifying potential new mineral resources at Golden Arrow, subject to exploration success”.

About the Golden Arrow Property

Golden Arrow is an advanced stage gold and silver property located in the western flank of the Kawich Range, located 40 miles east of Tonopah in Nye County, Nevada.  The Property consists of 511 patented and unpatented mineral claims totaling about 10,000 acres in size. It is situated adjacent to the western side of the Kawich Caldera, a large volcanic caldera that is eight miles in diameter.  Golden Arrow is a volcanic-hosted property and has four volcanic vents on or adjacent to the claims.  Those volcanoes or vents were part of the Central Nevada volcanic field, which was active between 36 to 18.4 Ma.

Golden Arrow has a comprehensive exploration database including geochemical sampling, geophysics, and over 201,000 feet of reverse circulation and diamond core drilling.  To date, two main resource areas have been drilled on the Property focusing on bulk disseminated gold and silver mineralization – the Gold Coin and Hidden Hill deposits.  Numerous other exploration targets were identified for exploration.

At Golden Arrow, most historic exploration was concentrated in the northern half of the claim block near the known resource areas of Gold Coin and Hidden Hill.  As described in a January 12, 2021 news release, Emgold staked 137 new unpatented mineral claims to the south of the known resource areas, expanding the Property.  The goal was to identify additional exploration targets following structural trends associated with Walker Lane faulting along the western edge of the Kawich Caldera. 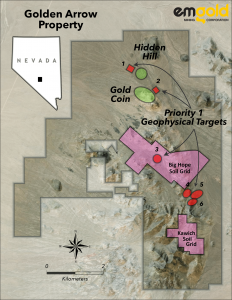 Rangefront submitted the samples to ALS USA Inc. assay laboratory in Elko.  Results were received from the laboratory and Emergent's technical team subsequently did a statistical analysis of the sample results and created a series of maps to show the sample results from key pathfinder elements, including gold and silver.  The sampling results confirmed the discovery of two new exploration targets, which have been named the Big Hope Prospect and the Kawich Prospect, as shown in Figure 1.

The Big Hope Prospect is situated south of the Hidden Hill and Gold Coin gold and silver resource areas.  This is an area in the western foothills of the Kawich Range that has received relatively little historic exploration.  The soil survey grid consisted of 657 soil samples taken on a 50 by 100 meter spacing.

This area was chosen for sampling because of the presence of several historic prospects and/or shafts, low level geochemical anomalies detected in prior surface rock sampling, along with one small historic geophysical anomaly.  Geologically, the area is mostly a topographic low in rhyolitic ash flow tuffs.

Part of the grid was situated on an inferred northwest-trending fault, and other faults are projected to cross portions of the grid.  It also included sampling of part of the Page Fault, a historically identified feature containing a number of historic shafts and workings mined in the early 1900’s.

Figure 2 below shows that elevated values of gold were detected in various areas of the soil sampling grid.  Anomalous results on the western sample lines appear to be associated with the Page Fault and inferred northwest-trending cross-cutting faults of the Walker Lane.  Higher assays occurred on trend with historic mine workings and prospects.  For color coding, values greater than the arithmetic average value are considered significant and colored red on the maps.  The highest grades, typically the top ten percent, are colored magenta on the maps.  Below average grades are colored green, with the lowest detected being blue. Black dots are used for samples that were below detection limits.

The results of this soil sampling program for the Big Hope Prospect are positive because this area was overlooked by previous companies, and yet soil assays suggest that there are distinct zones of mineralization in this area.  In addition, it appears that more samples should be taken to the north and south of the grid because mineralization extends to the edges of the grid.

The presence of historic mine workings and a few prospects in the area, along with Emergent's soil sampling results, indicates that mineralization post-dates the Pahranagat Formation tuffs or is at least contemporaneous with some tuff units.  This is significant because it means that the tuffs are prospective exploration targets, even though historic drilling by others did not find mineralization in the tuffs in the areas they drilled. 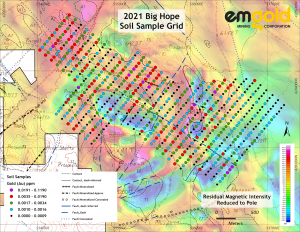 The Kawich Prospect is situated in the western foothills of the Kawich Range, in the center of the 137 new claims staked by Emgold.  It was chosen because reconnaissance geology mapping and rock-chip sampling indicated the possibility of mineralization in a broad and flat structural basin.  This basin is in rhyolitic tuff and lithic tuff breccia and includes a main northwest-trending fault plus cross-cutting smaller shears where historic mine workings and small prospects are located.

The sampling layout explored an area located between two sets of historic mine shafts and workings.  The survey grid consisted of 452 samples taken on a 50 by 50 meter spacing.  The sampling results indicate elevated soil sampling grades throughout the entire sampling grid, so the mineralized area is open to expansion in all directions.  Epithermal mineralization is associated with the northwest-trending fault and other minor structures.

Soil sample assays were evaluated by Emergent's technical team and results for gold are shown on Figure 3 below.  For color coding, values greater than the arithmetic average value are considered significant and colored red on the maps.  The highest grades, typically the top ten percent, are colored magenta on the maps.  Below average grades are colored green, with the lowest detected being blue.  Black dots are used for samples that were below detection limits.

Kawich Prospect Showing Gold in Soils with Resistivity and Geology

The soil sampling program was designed, and the field work completed, prior to conducting two geophysics studies on the new southern claims.  The results of the geophysics work, which included a helicopter magnetics survey and ground IP-resistivity study are summarized in a November 23, 2021 news release, available on the Company’s website at www.emgold.com or under the Company’s corporate filings at www.sedar.com.

The press release also summarized work completed by Condor Consulting Inc. (“Condor”), who reprocessed and analyzed historic and new geophysics work on the Property.  The 2021 Condor Geophysics Review (the “Condor Review”) identified 34 geophysical targets at Golden Arrow.  Of these targets, six priority geophysical exploration targets were identified.  Two are in the vicinity of the Gold Coin and Hidden Hill resources and four are on the new southern claim area.  The six priority geophysical targets identified by Condor are shown in Figure 1 for reference.

Of the six priority geophysics targets shown in Figure 1, Target 3, coincides with the Big Hope Prospect. Condor describes this geophysical target as being in a magnetic flat zone surrounded by complex magnetics, corresponding IP, a resistivity high, and GeoInterp prospectivity.  Figure 2 show the Big Hope Prospect superimposed with magnetics and geology.  The magnetics show northwest trends in this area, likely associated with the Walker Lane structural fabric.

The Kawich Prospect was identified as a medium priority target in the Condor Review.  The soil assays were compared to IP-resistivity and geology, as shown in Figure 3.  Mineralization exists within a prominent resistivity high.  The high resistivity zone continues north and south of the soil grid and high soil sample values occur on the north and south edges of the grid.  The epithermal mineralization is also situated in a northwest-trending high to low magnetic zone that coincides with the main fault mapped in the field.  Hence, both the geophysics and soils data indicate potential to expand this Prospect.

David Watkinson stated, “The combination of the soils data and the geophysics data shows geological evidence that there is potential to expand both the Big Hope and Kawich Prospects further, as well as find additional prospects on the new southern claims.  Additional exploration, including geological and structural mapping, soil sampling, and ultimately drilling, is warranted and the Company’s goal will be to expand the resources at Golden Arrow to 500,000 to 1 million ounces, subject to exploration success.”

Using sampling procedures approved by Emgold, Rangefront inserted a QA/QC sample at every 20th soil sample, for a total of 54 samples. Specifically, this included six standards, 32 blanks and 16 field duplicates. Before being shipped to the assay laboratory, the samples were stored in Rangefront’s warehouse and Rangefront delivered the samples in a single batch to the ALS preparation lab in Elko, Nevada. The samples were analyzed by with ICP methods, specifically ALS code AuME-ST-43, which is the 25g Super Trace Au+ Multi Element PKG.  ALS also conducted internal QA/QC analyses using standards, blanks and duplicates for each batch of samples analyzed.  The QA/QC results were reviewed by Emgold and found to be adequate.

Robert Pease, C.P.G., a qualified person under the NI 43-101 instrument, has reviewed and approved the content of this press release.

Emgold is a gold and base metal exploration company focused on Nevada and Quebec. The Company’s strategy is to look for quality acquisitions, add value to these assets through exploration, and monetize them through sale, joint ventures, option, royalty, and other transactions to create value for our shareholders (acquisition and divestiture (A&D) business model).

In Nevada, Emergent's Golden Arrow Property, the core asset of the Company, is an advanced stage gold and silver property with a well-defined measured and indicated resource.  New York Canyon is a base metal property subject to an Earn-in with Option to Joint Venture Agreement with Kennecott Exploration, a subsidiary of Rio Tinto Plc (NYSE:RIO).  The Mindora Property is a gold, silver, and base metal property located 12 miles from New York Canyon.  Buckskin Rawhide East is a gold and silver property leased to Rawhide Mining LLC, operators of the adjacent Rawhide Mine.

In Quebec, the Casa South Property, is an early-stage gold property adjacent to Hecla Mining Corporation’s (NYSE:HL) operating Casa Berardi Mine.  The East-West Property is a gold property adjacent to and on strike with Wesdome Gold Mine Ltd.’s (TSX:WDO) Kiena Complex and O3 Mining Corporation’s (TSX:OIII) Malarctic Property (Marban Project).  The Trecesson Property is located 50 km north of Val d’Or Mining Camp.  Emgold also has a 1% NSR in the Troilus North Property, part of the Troilus Mine Property being explored by Troilus Gold Corporation (TSX:TLG).

On behalf of the Board of Directors
David G. Watkinson, P.Eng.
President & CEO